That looks like what happens when there is no signal getting to the feedback circuit. Use an oscilloscope to make sure that the hv signal from the amplifier is getting to the switching boards.

Another common problem that results in a graph like that is not connecting the red alligator clip to the test board.

Ok so I just connected a scopemeter to my bot and here are the results:

When I turn the system on, this is the reading coming from the 'Out to amp" BNC: 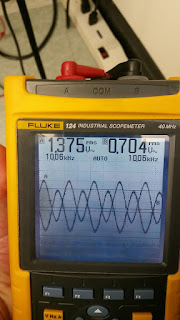 When the ‘test channels’ program is running, the reading from the ‘Out to Amp’ reading changes to this: 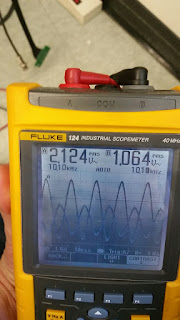 And then using the voltage monitor BNC on the amplifier while the ‘test channels’ program is running, the voltage looks like this: (it does not look like the correct voltage is being applied for some reason) 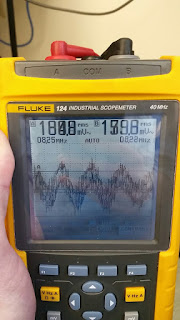 In my amp is applying 100V/V gain, then doesn’t that mean the amp would put out ~212V with the current output set by the signal generator board in the second picture? I feel like it should only be at ~0.1V output if 10V were to be applied during the test channel program. I have not tested the output directly from the amp as I don’t want to fry my scope and/or myself if my signal generator board is set wrong.

I’m running Microdrop from the thumb drive version because I just couldn’t get the desktop version to work. I was having the same problem Christian was having with the plug in, where Microdrop worked before installing the dmf plug in. I tried your workaround which seemed to have worked. However, when I tried to open Microdrop it gives me the error shown in the picture and I’ve no clue what to do.

I would appreciate your help with this issue. 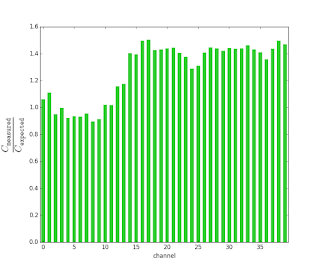 I figured out what was wrong with my DropBot a couple weeks ago and thought I would post to help anybody else having similar problems.

First thing that was wrong- a loose ground wire was causing intermittent ‘Analog channels [1,0] appear to be damaged’. Some times I would get the error, sometimes not. I connected the ground wire more securely and the issue stopped.

Second- as shown int he scopemeter pictures below I was getting the wrong voltages for certain setting. The issue here was that I didn’t understand how to read the scopemeter, and subtracted the voltage readings instead of adding them together - so I had calibrated my bot to produce 2V instead of 1V at rest.

Third - The channel readings were way off even after fixing these issues, basically showing the a reading as if the amplifier wasn’t on. 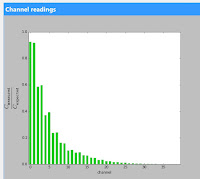 I figured out the problem was loose connections in my control board. When I had my boards created by Gold Phoenix they had a bunch of questions about the samtec through hole connector parts (picture below) parts and had issues ordering them, getting the parts shipped to their facility etc. so I just ordered these parts and added them to the mostly complete PCB’s. I was worried about the control board working, and the fact that I had two of them to test meant I simply put the parts through the PCB and plugged them into the Arduino without soldering them to the board. At first the boards all turned on just fine but after changing the control boards and fixing wires etc. I think adding and removing the connectors wore out the connection between the hole and the connectors, making the LED’s flicker and ultimately leading to my bot not working. After I figured out that both control boards were probably working fine and it was just bad connections that were causing problems I went ahead and soldered the connectors and what do you know the bot works as it should! 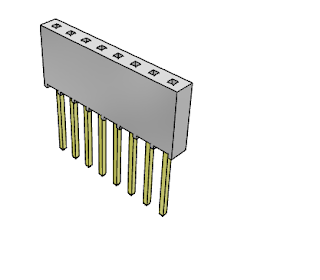 So in my experience with the DropBot assembly loose wired were the main cause of all my problems!

Now after fixing the wires my board calibrations did not look great yet, but adding the anti-alias chip and running through the high voltage and device load calibration steps leaves me with a functioning bot, with switching board results posted below.